Tamás Beke-Somfai, head of the Biomolecular Self-Assembly Research Group at the Institute of Materials and Environmental Chemistry of the ELKH Research Centre for Natural Sciences (TTK) has won a grant of HUF 320 million within the framework of the 2022 Frontline – Research Excellence Program of the National Research, Development and Innovation Office (NKFIH). The purpose of the five-year project with the title Functional Monitoring of Supramolecular Peptide Systems is the examination of antimicrobial peptides (AMPs) that contribute to natural immune response against microorganisms resistant to conventional antibiotics. 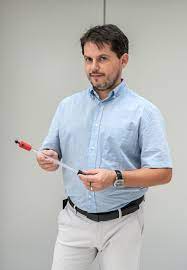 The appearance and spread of harmful bacteria and fungi resistant to conventional antibiotics are among the greatest threats to health of our time. In the absence of effective small molecule drugs, infections caused by these super-resistant microorganisms may, according to the WHO, become the leading cause of death by 2050.

What are known as antimicrobial peptides (AMPs) contribute to the natural immune response to these microorganisms. The researchers did not encounter significant resistance to these peptide chains comprising 15 to 40 amino acids. Based on the research of recent decades it is known that AMPs are typically short peptide sequences with strong positive charges that frequently attack the negatively charged cell membranes comprised of lipids that surround the pathogen. Nonetheless, many questions remain about the mechanism of action of AMPs. It is yet to be explored what interactions may develop with the naturally occuring small molecules produced by the human body or the pathogens. It is also not known what higher-ordered associations may develop with these small molecules.

As part of their current project, Tamás Beke-Somfai and his research partners are focusing on two important areas related to supramolecule AMP associations.

There are countless human- and bacterially derived small molecules, the indirect interactions of which allow us to modularize the activity of AMPs. The objective of the researchers is therefore the in-depth assessment of components of key importance, as well as the in vitro mapping of possible interactions. In addition to the supramolecular associatives created by human- and bacterially derived small molecules and AMPs, they will also be investigating endogenous molecules and molecules approved by the American Food and Drug Administration (FDA) in the interests of performing systematic research. In their recent ground-breaking research, they demonstrated that the development of AMP associatives may be induced by drug molecules, food colorings and biomolecular markers.

In addition to this, the objective of the researchers is to explore the interaction between AMPs and peptide associatives that may represent new opportunities for their controlled delivery. The nano carriers may mitigate the undesired properties of the AMPs, such as sensitivity to digestive enzymes and their cytostatic, neurotoxic activity, which is essential to their applicability for therapeutic purposes. Tamás Beke-Somfai and his colleagues recently developed peptide associatives assembled from natural and non-natural amino acids, which they further modified in accordance with their objective. Within the scope of the current project, the researchers are planning the creation of peptide AMP complexes and supramolecular arrangements containing non-natural sequence sections, which may be applicable to the regulation of AMPs or their regulated delivery.

The Frontline – Research Excellence Program provides an opportunity for talented researchers to work on a world-class research project in Hungary over the next five years that will help them to successfully participate in research proposals announced by the European Research Council (ERC).

Hungarian researchers unveiled hot electrons with the help of lasers