The ELKH-ELTE Astropolarimetry Research Group examines the polarization patterns of sunlight scattered by interplanetary dust at the L4 and L5 Lagrange points of the Earth–Moon system, measured by imaging polarimetry. By employing this method, the research team proved the existence of the Kordylewski dust cloud, which many astronomers had previously doubted, at the L4 Lagrange point of the Earth–Moon system. Their study presenting the results of the research was published in the journal Monthly Notices of the Royal Astronomical Society.

In 1767, Leonhard Euler discovered the equilibrium points L1, L2 and L3 in the orbital plane of the gravitational field of a pair of celestial bodies orbiting around their common center of mass. A few years later, Louis Lagrange found two more such points: L4 and L5. If a body with a sufficient initial velocity is positioned at any of these five points, then it will orbit together with the celestial pair of bodies with the same angular velocity, with its relative position remaining unchanged. Given appropriate mass ratios, the L4 and L5 points are stable, meaning the third body will – without ever travelling far away from them – perform what is called a libration movement while remaining close to these points. As a result, both Lagrange points can trap interplanetary dust particles and even asteroids approaching them at moderate speeds, acting as “celestial vacuum cleaners”. At the same time, the L1, L2 and L3 points are always unstable, meaning that when the third body is pushed out of them, it starts moving away slowly and then this getting off accelerates. If the third body has a negligible mass compared to the other two bodies, then the stability of points L4 and L5 depends only on the mass ratio of the two large bodies. The mass ratio of the Earth and the Moon is such that their L4 and L5 points are stable, so interplanetary particles can collect there.

This is why the Polish astronomer, Kazimierz Kordylewski began to search for the possible accumulation of dust at points L4 and L5 of the Earth–Moon system. After Kordylewski observed two very faint dust clouds around the L5 point with his naked eye and then detected them with photometry in 1961, many astronomers also started looking for the dust clouds now named after him in the night sky around the L5 and L4 points. Over the course of several decades of investigation, some astronomers have observed their presence, but others were unable to detect one or either cloud. This is why a part of the astronomical community adopted the skeptical opinion that, although the Kordylewski dust clouds may well exist, their photometric observation had not been sufficiently proven, and their existence also remains uncertain, because the theoretical stability of the L4 and L5 points – that is, the Earth and Moon's collective local gravitational trapping ability at both points – could be destroyed by the Sun's gravitational perturbation.

A turning point in this deadlock came on the nights of August 17 and 18, 2017, when ELTE researchers using a wide-field-of-view astronomical telescope equipped with an imaging polarimeter managed to measure the linear polarization pattern of the Kordylewski dust cloud around point L5 on two consecutive nights (ELTE researchers verify existence of Kordylewski dust cloud). Astronomical polarimetry has proven to be effective in detecting the polarization of sunlight scattered by interplanetary dust at night, but its application in Hungary is hindered by the relatively unfavorable astroclimate prevalent in the country. On the one hand, there are few places in Hungary that are free from astronomical light pollution, and, on the other, there are only about ten nights in a year when the cloudless sky is favorably low in aerosols and where the L4 or L5 Lagrange point of the Earth-Moon system appears in the moonless sky. In order to eliminate this problem, it would be worthwhile continuing the investigation of the polarized light scattered on the interplanetary dust from locations with a favorable astroclimate, such as dry deserts, and with a portable, wide-field-of-view telescope equipped with a polarimeter.

For this purpose, on July 1, 2022, the ELKH-ELTE Astropolarimetry Research Group was formed under the leadership of Professor Gábor Horváth and with the participation of researchers Judit Slíz-Balogh, Attila Mádai and Pál Sári, who began the construction of a portable polarization telescope. Over the next five years, the researchers plan to measure changes in and the dynamics of the polarization properties of interplanetary dust at the ISABIS Astro Lodge astrofarm in the Namibian desert. Until this telescope is ready and observations in the desert can begin, the polarimetric measurements will be carried out with the polarization telescope operating in the private observatory in Badacsonytördemic under the leadership of one of the group’s astronomers, Judit Slíz-Balogh. Through this telescope, the Kordylewski dust cloud was observed for the third time at the L5 Lagrange point on the night of October 31, 2021, and the dust cloud around the L4 Lagrange point was observed for the first time on the night of July 3, 2022 (Figure 1). These new polarimetric observations may dispel doubts about the existence of Kordylewski dust clouds formed at the L4 and L5 points of the Earth and the Moon. 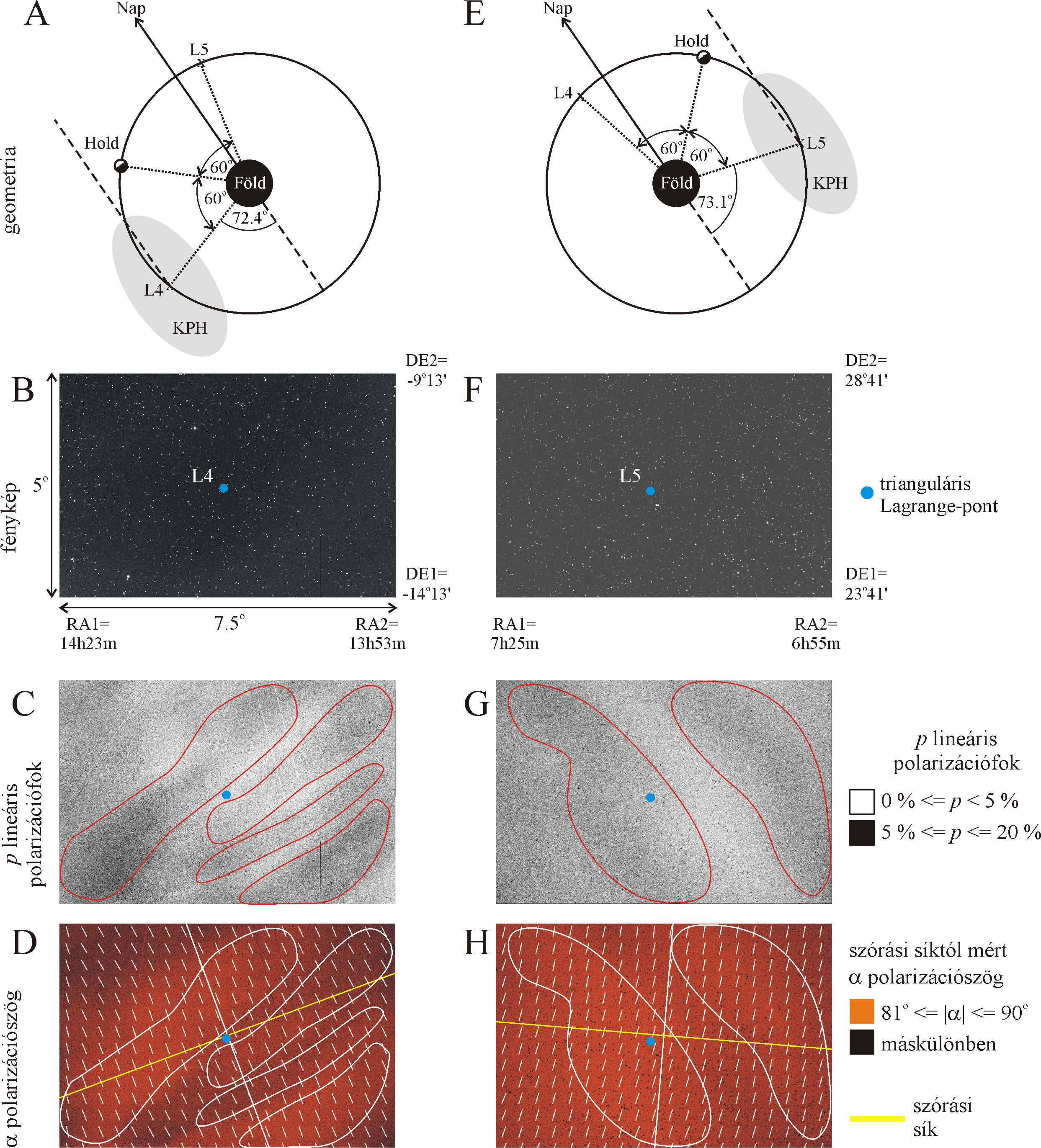