A team from the ELKH Institute of Experimental Medicine (IEM) led by Balázs Rózsa and researchers from the BrainVisionCenter Research Institute and Competence Centre (BVC), working in close collaboration with the Friedrich Miescher Institute based in Basel and the Pázmány Péter Catholic University have discovered previously unknown features of neuronal plasticity in the hippocampus of awake animals. Linda Judák, Balázs Chiovini, Balázs Rózsa and members of the KOKI 3D functional network and dendritic imaging research group investigated the sharp waves (SPW-Rs) that play a key role in the encoding, storage and retrieval of long-term memory in the hippocampal region of the brain. A study presenting the results was published in the prestigious journal Nature Communications.

It is well-known from literature that the sharp wave appears at rest and during slow waves during sleep. In vitro experiments have already demonstrated that sharp-wave-associated neuronal clusters generate spatially and temporally clustered activity ("hot-spots") in the dendrites of inhibitory neurons, but this has not yet been confirmed in vivo. Overcoming the technical and methodological difficulties, the research team was the first to demonstrate in vivo, i.e. in living, behaving animals the regenerative processes associated with sharp waves in the dendrites of parvalbumin+ (PV+) inhibitory interneurons. 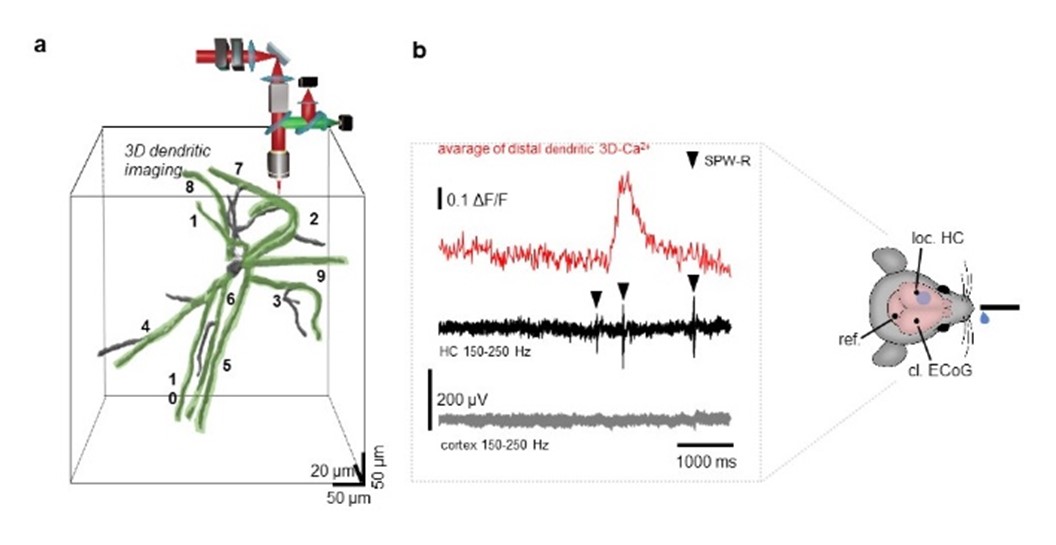 Schematic of the in vivo experimental design: combined ipsilateral local field potential (LFP) recording and 3D two-photon dendritic imaging measurements with AO microscopy during SPW-Rs in the periods of water licking. a: Full stratum oriens dendritic arbor of the SPW-R-correlated PV+ cell in the hippocampus. Green ribbons indicate dendritic segments selected for simultaneous fast 3D ribbon scanning. In this example the total lenght of the simultaneous measured dendrites were about 1500 µm long and the measurement speed was about 64 Hz. Left b panel: Representative filtered local hippocampal LFP signals with different SPW-R events (arrowheads) from the stratum pyramidale from the ipsilateral hippocampus (middle) and from the cortex (bottom). Right b panel indicates the position of the local hippocampal (loc. HC), reference (ref.) and contralateral cortical (cl. ECoG) electrodes.

Due to this experimental design, complex Ca2+ events were detected in different subcellular regions of hippocampal PV+ neurons in awake animals. For the first time, it was possible to simultaneously measure not only the activity of PV+ neurons but also the entire dendritic tree of active cells. Despite the continuous movement of the brain, the researchers were able to measure simultaneously the entire dendritic system of PV+ interneurons over 1500 µm in length, using fast 3D acousto-optical imaging combined with fast motion artifact elimination, high volume and high spatial resolution. Another important result is the demonstration of the existence of dendrite-specific Ca2+ regenerative action potentials (Ca2+ spikes) coupled to the sharp wave. It was shown that these spikes are most pronounced away from the cell body (~150 µm), in the distal dendritic parts of the PV+ neurons thus showing a distance dependence with respect to the cell body.

Discovery of dendritic signal integration mechanisms measured under SPW-R singlet and SPW-R doublet in vivo on distal dendrites of PV+ interneurons. a: Representative raw and filtered LFP data showing the first and second events of the SPW-R doublet (black triangles). b-c: Supralinear Ca2+ summation during SPW-R doublet. Different SPW-R associated dendritic Ca2+ signals were compared. The gray curve shows the single SPW-R dSpike, the red curve the SPW-R doublet dSpike. The dashed line shows the mathematical sum of the single signal. The result shows that the signal under the doublet is significantly greater than the mathematical sum of the single dSpike. The researchers explain this with supralinear signal integration mechanisms in the dendrites of PV+ neurons ‒ which have not yet been demonstrated in vivo.

It has also been observed that during the double sharp waves (SPW-Rs doublets), a hitherto unknown neural integration takes place. Neuronal spines, acting as a kind of coincidence detector, generate extremely large Ca2+- signals along distal dendritic segments, but only when two sharp waves follow each other within a short time interval (~100 ms). Since this newly discovered dendritic integration appeared only when two memory axons and the neuronal activities representing them were sufficiently close to each other, it can be assumed that an important mechanism of associative memory has been elucidated.

The BrainVisionCenter was founded in 2021 by Botond Roska, Balázs Rózsa and the Ministry of Innovation and Technology. The first results of the collaboration between BVC and ELKH have been published in the prestigious journal Nature Communications.