Within the framework of a project run by the National Laboratory of Water Science and Water Safety ecologists at the ELKH Centre for Ecological Research (CER) investigated the changing habitat use of fish near the shallower banks of the Danube. On October 10, 2022 the researchers collected data from the section of the Danube between Sződliget and Vác on which species choose the shallow inshore habitat both at night and by day by fishing from the riverbank during both periods. 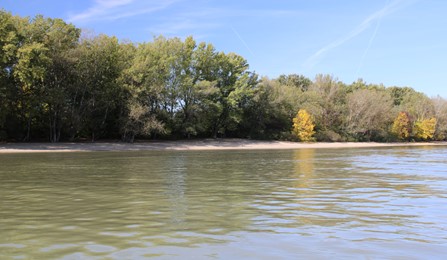 The section of the riverbank subject to examination

Fish can use different habitats for breeding, feeding, resting and wintering. During the breeding season some fish migrate within the river in search of places suitable for spawning. In the Danube, for example there is the common nase, which swims up the river for several kilometers in search of a suitable spawning place when breeding. But the largest fish species that once lived in the Danube, the beluga sturgeon would also search for suitable spawning grounds in a similar way. The beluga sturgeon would swim up from the Black Sea in order to spawn in the gravelly and stony sections of the Danube before returning to the sea after breeding. The offspring only later followed their parents down the river into the salt water. However, fish do not necessarily need to travel such large distances between their habitats. They can also change their habitats across smaller distances, between the shallower parts of the river close to the banks and the inner parts of the river bed. In addition, the habitat requirements of fish can vary not only with their age and the season, but also with the time of day. This is why it can sometimes happen that even the shallow zone of a river near the banks serves as the habitat for some types of fish during the day, and others at night. 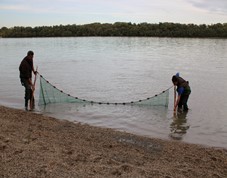 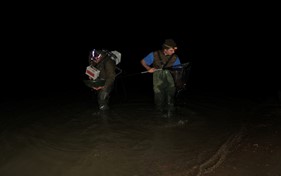 Catch of diurnal and nocturnal samples

CER researchers identified a total of 15 fish species caught from the riverbank. Of these, the asp, the white-finned gudgeon, the cactus roach and the striped ruffe are of international importance: they are included among the so-called Natura 2000 species in the European Union, and the latter three are also protected under Hungarian regulations. The cactus roach and the striped ruffe are species indigenous to the Danube water system and today no longer live outside the Danube watershed, where they evolved through phylogenesis. The research confirmed that in addition to the aforementioned ‘treasures’, the shallower habitats near the Danube‘s banks are also frequented by fish that do not originate in the Carpathian Basin, making them foreign to Hungary. These include the species belonging to the bottom-dwelling gobiidae, which inhabit the semi-saline waters around the Black Sea and the mouths of rivers that flow into the sea, including the Danube Delta. From there, they set off on their ‘path of conquest’ up the rivers of Europe in the 19th century. In netting the samples, the researchers caught five species of gobies considered non-native to Hungary: racer gobies, round gobies, monkey gobies, Kessler's gobies and western tubenose gobies.

54 percent of the specimens caught were found during the nighttime sampling and 46 percent during the daytime sampling, with about three-quarters of them being non-native gobies. The only juvenile carp that was caught, along with the western tubenose gobies, were only caught during the day, while the Volga pikeperch, cactus roach, common nase, zander and vimba bream were captured only at night. Asp, racer gobies, round gobies, monkey gobies white-finned gudgeon, Kessler's goby, striped ruffe and common bleak were found in both diurnal and nocturnal catches. The smallest fish caught, a round goby, had a body length of only 14 mm, while the largest, a young zander, was 198 mm long.

Gobies, white-finned gudgeon and stripe ruffe in the catch

According to the collected data, young specimens of small-sized bottom-dwelling fish, such as the white-finned gudgeon and the gobies, as well as of large-sized fish that prefer the deeper parts of the riverbed and open water habitats, such as zander and common bleak, typically reside near the shallow shore. In the case of seven species there was a difference between different times of the day, so they were present only in either the diurnal or nocturnal samples. In addition, the number of fish caught was slightly higher at night than during the day. The reason for the difference in the data between the times of day is to be found in the differences in the daily activities of the species. Some species feed mostly during the day and rest at night, such as the typically diurnally predatorial asp. On the other hand, there are also species that are active in the opposite way, prefering to feed at night and rest during the day. An example of this is the zander, which is typically a twilight and nocturnal predator.

The researchers are continuing their investigations and expect future results to provide a deeper understanding of what fish are found in the riverbank habitats at what times and why.