Archaeological excavations at the Bakonybél-Szentkút site led by BTK completed

Archaeological research of the Bakonybél–Szentkút site took place in May and July 2022 as part of the Kings, Saints and Monasteries research program, supported by the Eötvös Loránd Research Network (ELKH). As part of a project organized by the ELKH Research Centre for the Humanities (BTK) and led by Balázs Szabolcs Nagy, a researcher at the ELTE BTK Institute of Archaeology, the scientists’ work has included the excavation of a rock cavity that – according to legend – was the residence of the Venetian Benedictine monk Saint Gellért (Saint Gerard) during his period of reclusory at Bakonybél. Saint Gellért is considered the first martyr in Hungarian history. The precise details of the use of the cavity in this area, which is believed to have been a place of pilgrimage, and the chapel that once stood next to it, which is thought to be connected to it based on the excavation, are still unknown. However, the metal and ceramic artefacts found provide convincing support for the idea that the cavity was used in the medieval era or earlier, as well as indications of intensive use of the site during the era of the Árpád Dynasty.

The Szentkút site excavated as part of the current project, which is located just one kilometer south of the Benedictine monastery complex in Bakonybél, was first excavated for scientific purposes in 2016-17. During the work that took place at that time, a part of a larger cavity was found on the top of the cliff known as Borostyán-kő (Amber Stone), a site that was used as a calvary hill from the 19th century, as well as the ruins of an approximately 12th-14th century stone chapel decorated with wall paintings. The researchers established that the building left behind in the ruins may have been the former chapel of the Virgin Mary of the Benedictine monastery, which was built in the 9th century. According to Pope Gregory IX’s certificate of privilege issued in 1230 confirming the monastery’s ownership and ecclesiastical privileges, it stood above the rock of St. Gellért (“supra rupem sancti Gerardi“). From the text of the certificate preserved in the Archives of the Benedictine Pannonhalma Archabbey, it appears that the monastery’s possessions included, among other things, “the entire area where the above-mentioned monastery stands, the chapel of the Virgin Mary raised above the rock of St. Gellért in the same place, and the chapel of Mary Magdalene, Soruul (= Sarvaly) over the garden” (translation by Izsák Baán).

The Benedictine monastery in Bakonybél was founded in 1018 by the king Saint Stephen of Hungary. Queen Gisela also took an active part in its development, and according to the surviving fragments of the certificate, she made donations to the monastery. It is known from the biography of the Venice-born Saint Gellért that shortly after his arrival in the Kingdom of Hungary in approximately 1023, he spent seven years as a hermit in the Bakonybél forest. From there, Saint Stephen, founder of the Hungarian state, called Gellért to head the Marosvár – later Csánád – bishopric, before Gellért died a martyr’s death on Gellért Hill in 1046. The medieval name of the rock mentioned in the papal document can clearly be tied to the hermitage of Saint Gellert in Bakonybéli. Although the rock cavity could not be fully excavated during the previous planned excavation, the location of the cavity next to the chapel and the significance of the site within the hermitage tradition raised many questions. 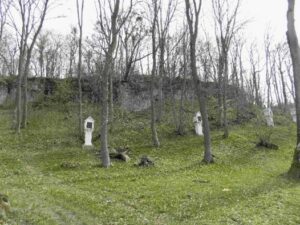 The excavation site, Borostyán-kő (Amber Stone), the rock plateau accessible along the calvary

The current excavation of the rock cavity

The rock cavity has only just been fully excavated. The archaeological excavation was organized by BTK under the direction of excavation leader Balázs Szabolcs Nagy, with the expert help of the Natural History Museum of Bakony Mountains department of the Hungarian Museum of Natural History. 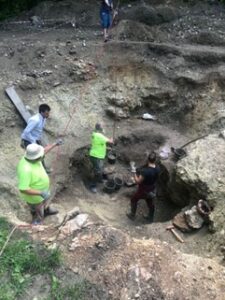 Due to the conditions of the excavation site and the surrounding area, the contents of the cavity were not removed in the usual way

The research carried out using speleological methods among others extended to the edge and the bottom of the rock cavity, which stretches nearly 5 meters deep from the external pedestrian level. Based on the shape of the cavity, one of the most important questions has finally been clearly resolved: the deepest section has a regular, virtually square plan – approx. 1.2 x 1.2 m. In other words, the recess is undoubtedly artificial. The content of this deepest part also brought to light some medieval finds, among them a generously worked red carved sandstone from the ruins of the chapel. The filling of the rock cave, which began during the 15th and 16th centuries, was only completed in the early 19th century, when its original purpose was long forgotten. 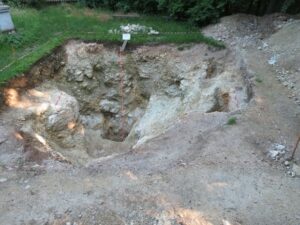 Excavation area next to calvary. The formation leading to the rock cavity is clearly visible.

Both modern historical sources and the unearthed findings support the fact that the cave was established in the Middle Ages or possibly earlier. Based on the scattered prehistoric and Roman finds, it is conceivable that it had antecedents prior to the Árpád era. However, if this was the case, the recess was cleaned out again during the Middle Ages and in all likelihood transformed. There was no early culture layer at the bottom of the cavity and on the steep side walls that deepen into the rock plateau, while a significant layer of humus or weathered dolomite rock would certainly have been washed over the centuries from the edge of the cavity.

It was probably possible to descend to the bottom of the cavity from the east, since the side wall is the least steep on this side, and you can also see phenomena that resemble artificial carvings on the surface of the rock, which can presumably be explained by the presence of a wooden structure.

The bottom of the rock cavity is 1.2 x 1.2 m in size, and its depth is 5 meters from the current pedestrian level.

The rock cavity may have been closely related to the Árpád-era Saint Mária chapel described in the aforementioned certificate as above the Rock of Saint Gellért, the debris of which was found by examining the contents of the cavity. During the Middle Ages, the chapel named after Saint Gellért and the cavity of the same age located on the same rock outcrop were most likely connected, since without regular cleaning or some kind of covering, the cavity would have gradually filled up and would not have lasted until the chapel itself fell into ruins. Nevertheless, in all likelihood the stone-walled building set in mortar did not rise directly above the cavity. The rock cave and the chapel – which certainly stood somewhere next to the recess on the rock plateau – are undoubtedly closely related to the supposed or real presence and memory of the 11th-century hermit saints Saint Gellért and Saint Günther. The parallels of cave hermitage lead to the early Christian saints in the East, though for example a period of hermitage in a rock cave also plays an important role in the life story of Saint Benedict of Nursia, the founder of the Benedictine order. According to the accounts of the saint’s life, he spent several years in one of the difficult-to-access caves in the mountains around Tivoli, where his food was also provided with outside help. 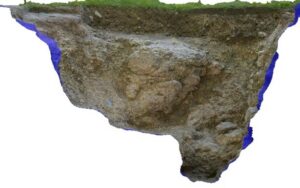 The cavity may therefore have had a sacred role, but more precise details of its use are not known. It is still an open question whether the cavity, which has a floor area of only about 1.5 m2 in its deepest square part and a useful internal area of approximately 8-10 m2 in total, could have been inhabited during the Middle Ages, either by St. Gellért himself or by later monks who shifted from monastic community life to solitude as hermits. Alternatively, the rock cavity may have been assigned a role only later in the promotion of the local saint cult. Whether the site functioned as a hermitage or as a place of worship, or even both, the metal and ceramic finds collected on the rock plateau and at the foot and side terraces of the rock outcrop convincingly support the intensive use of the site during the Árpád period.

The experts will introduce the results of the monastic research projects supported by ELKH to those interested at the conference in November.